Beyond the Haiku – A Japanese Poetry Workshop plus an evening event.

In this one-day workshop, Katrina Naomi will offer a range of writing exercises based on both contemporary Japanese poetry and traditional Japanese forms. We will read and respond to poetry from the 8th to the 21st century, much of it written by women, looking at the work of Kobayashi Issa, Noriko Ibaragi and Toshiko Hirata, among others. We might even try some basic translations (no knowledge of Japanese is required). Come prepared to read widely, to be inspired and to write plenty.
Please contact Vik Shirley on vikis@btinternet.com to book.
Facebook event
Katrina Naomi – Poetry & Teaching
Katrina Naomi is a poet, tutor and poetry mentor. Katrina’s poetry has appeared in ‘The TLS’, ‘The Poetry Review’, ‘Modern Poetry in Translation’, and on BBC Radio 4.
Katrina Naomi recently visited Japan following an Arts Council International Artists’ Development award to work on the ‘Basho & Beyond’ project. In 2018, she received an Authors’ Foundation award from the Society of Authors to work on her third poetry collection, due from Seren in 2020. Her latest collection The Way the Crocodile Taught Me (Seren, 2016), was selected as a #FoylesFive for poetry. In 2017, her work was highly commended in the Forward Prize for Poetry. Her pamphlet Hooligans, inspired by the Suffragettes, was published by Rack Press (2015). Katrina’s first full collection, The Girl with the Cactus Handshake was shortlisted for the London New Poetry Award and received an Arts Council writer’s award. She won the 2008 Templar Pamphlet competition with Lunch at the Elephant & Castle. Katrina has been writer-in-residence at the Arnolfini, Bronte Parsonage Museum, The Leach Pottery and Gladstone’s Library. She has a PhD in creative writing from Goldsmiths, her thesis focuses on violence in poetry, and she is a Hawthornden Fellow. Katrina teaches for Arvon, Ty Newydd and the Poetry School, and mentors for the Poetry Society.
Typhoon Etiquette, a pamphlet of Japan-inspired poems, will be published by Verve Poetry Press in April 2019.
www.katrinanaomi.co.uk 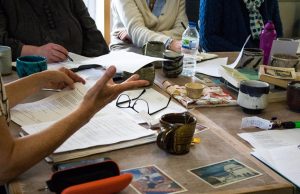 The first part of the night will be a poetry open mic. Slots will be on a first come, first served basis. The slots will be five minutes, so one or two poems per poet.

The Japanese themed Typhoon Etiquette is Katrina Naomi’s latest pamphlet (Verve Poetry Press, April 2019). She wrote it while on a six-week Arts Council project in Japan. She is currently working on her third full collection, to be published with Seren in June 2020, for which she has received an Authors’ Foundation award from the Society of Authors. Her latest collection is The Way the Crocodile Taught Me (Seren, 2016). She was commissioned by the BBC for National Poetry Day in 2018. In 2017, her poem ‘The Bicycle’ was highly commended in The Forward Prize. Katrina has a PhD in creative writing from Goldsmiths. She teaches for Arvon, Ty Newydd and the Poetry Society, and runs Poetry Surgeries for the Poetry Society. Katrina lives in Cornwall. www.katrinanaomi.co.uk

Rachael Boast is the author of three collections of poetry, most recently, Void Studies (Picador 2016). She is co-editor of The Echoing Gallery: Bristol Poets and Art in the City (Redcliffe Press 2013) and The Caught Habits of Language: An Entertainment for W.S. Graham for Him Having Reached One Hundred (Donut Press, 2018). She lives in Bristol.

Holly Corfield Carr makes poems, books and performances for museums, galleries and sites across the UK, including an orchard, an eighteenth-century crystal grotto and a passenger ferry called Matilda. She has read her work on BBC Radio 4 and at the Royal Albert Hall for BBC Radio 3 and worked as poet-in-residence for the Wordsworth Trust, Spike Island and the National Trust. She received an Eric Gregory Award from the Society of Authors in 2012 and won the Frieze Writer’s Prize in 2015. Her most recent publications are Subsong and Indifferent Cresses, both published by the National Trust. www.hollycorfieldcarr.co.uk